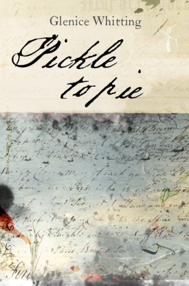 Writers often dream of being published and getting their work ‘out there’. I am no exception. I had just completed my Masters of Creative Writing at Melbourne University when my first novel, Pickle to Pie co-won the Ilura Press International Fiction Quest. This meant a cash advance, plus publication and I was beside myself with excitement. Pickle to Pie was the story of a boy, a great-hearted German Grossmutter and a man caught between two worlds. It was a record of my father’s life. In his late eighties he would sit for hours telling me, or whoever would listen, the stories of his early life as a boy with a German name living through two world wars and a depression. After he died I discovered a box of old German postcards and decided to write his story. In the process I came to terms with my previously hidden German heritage.

In any society, there are many forms of cultural and personal censorship that prevent the telling of tales considered unpalatable, unsavoury, subversive or insignificant. The result is that written history can be one sided, dominated by strong cultural groups, the stories of minorities unvalued and unrecorded. These stories cry out to be heard and with every life extinguished, we lose part of our collective memory. Writers can give voice to neglected stories of human beings who have been damaged deeply by world events.

To be a guest speaker at the Historical Novel Society’s Conference Academic Program Session four at Swinburne University is a dream come true. On the 10th September from 10am-11am our focus will be on the Lie of History. It is my chance to give voice to the children of German descent who lived in Australia during the last century and struggled to come to terms with their opposing worlds.

I had promised myself, if Pickle to Pie was ever published that I would give up my day job. Hairdressing had always augmented the family income through good times and bad. After the book launch I stuck to my promise, sold the salon and walked away to a life of poverty. I knew I was not a J K Rowling, but I was happy.

My second novel has just been published but it has been a long road to publication. This manuscript has had at least three reincarnations with a change of title each time. Each version has its own merit and has taught me something valuable about the craft of writing. The novel, ‘Something Missing’ began life as ‘Hens Lay, People Lie’: my artefact for my PhD at Swinburne University.

I had often toyed with the idea of studying for my PhD but never dreamt it could happen. However, to be awarded an APA scholarship meant the opportunity to study at Swinburne University. I grabbed it with both hands. With the help of two supervisors I could learn the craft of writing and understand all the rules. I would then know why I was breaking them. I decided to do what so many writers do. I chose to write something close to my heart. Something entirely different. This time it would be based on my thirty-five year pen-friendship with an older American poet, a story about two women, a life changing pen-friendship and the lies they tell each other. I wrote in my journal, ‘I am writing an epistolary, autoethnographic novel grounded in both feminism and post modernist paradigms with the aim of revealing women’s hidden stories in the hope of instigating social change. I believe this embedded story of the journey of self discovery and friendship will carry with it the possibility of nothing less than the restoration of faith in human kind.’

What lofty aims, but here was a chance to use our letters, interspersed with text, to explore the influence this elderly poet had on a young woman who left school at fourteen to become a hairdresser: a woman who unconsciously yearned for the education given to her brother and denied to her. My journey into epistolary fiction using letter, diary and journal extracts, plus snippets of poetry, had begun. 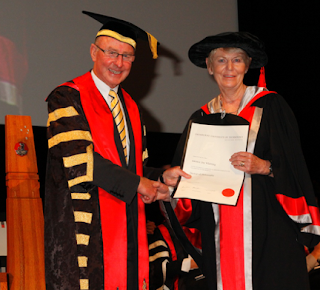 I began work using an older American woman’s voice in first person narration; an elderly Australian woman in second person; and the young Australian mum in third person. The story would have embedded dialogue, following author, Debra Adelaide’s example, where only the formatting and actions of the characters, rather than dialogue marks, reveal to the reader who is speaking at that time. The elderly Australian woman would reveal the pitfalls and joys of writing a novel in a humorous, tongue in cheek, vein.

For three and a half years I am caught up in a world where my mind kept bouncing backwards and forwards between my creative writing of this novel and the formal academic exegesis.

Friends warned me that I would have a meltdown post PhD, but I was convinced that would not happen to me. I was too strong, too resilient. That sort of breakdown only happened to other people. The wail of the ambulance soon bought me back to earth with a thud. I asked my adult son what section of hospital I was in. He replied, ‘The resuscitation room, Mum.’ Two weeks later, just home from hospital and feeling weak and tired, I had resigned myself to missing my already paid for graduation ceremony. My son hired a wheelchair, determined I would make it.

There were only three PhD degrees awarded that night. I waited in the wings for all the BA’s, Masters and double degrees to be awarded before my son wheeled me over to join the queue waiting for their turn to hear their name called and to climb the stairs to the stage. Determined to walk under my own steam, doubts filled my mind. What if I couldn’t manage the stairs? What if I fainted, collapsed, or worse still, threw up when the chancellor, in all his finery handed me my much sort after certificate. What if...

To leave my wheelchair and walk on stage wearing the hired floppy Tudor bonnet and colourful gown was a highlight in my life. I had an overwhelming feeling of achievement and self worth that no one could take away from me. Afterwards, I thankfully joined my peers on the stage and proudly marched out with the academic procession only to flop into the wheelchair waiting by the door. The mature aged student journey from VCE to PhD had required passion, dogged determination and guts, but it had also been the most exciting, exhilarating time in my life. I knew I would miss it and all the friends I’d made along the way.

Using my recently gained title of Dr Glenice Whitting I sent my edited and, according to me, perfect manuscript out to publishers and waited for the offers to come rolling in. Nothing happened. Slowly, relentlessly, one after the other a stream of rejections arrived. ‘Thank you for sending Hens Lay People Lie, however...’ 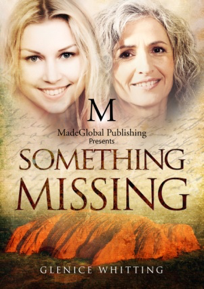 I was caught in a catch-22 situation. To get a publisher I needed an agent but to get an agent I needed a publisher. I also took a long hard look at what I’d written, and following the suggestions of American author/editor, Cindy Vallar, I inserted quotation marks to all the dialogue and renamed the manuscript ‘What Time is it There?’ Still the rejections arrived. It was ‘too academic’ too many voices, too literary, too hard to read and so on. Had I, over the years of study, begun to sound as if I’d swallowed a dictionary? I knew I had to, once again, rewrite the manuscript. It took a huge leap of faith to take it from literary fiction into popular fiction.

The third reincarnation is the one that is published. It was an invaluable lesson. To be a writer I had to be myself and write the way I really wanted to write, from the heart. I took out the overarching second person narrating character, made both Maggie and Diane third person narration, threw in a handful of suspense and Voilà ...’Something Missing’ was born. It had gone beyond academia, beyond epistolarity into what is now called, popular faction. I was over the moon with excitement the day I received the email from Tim Ridgway and Melanie V Taylor of the international MadeGlobal Publishing. They loved the story and would I sign the contract?

It is every writer’s dream to hold their book in their hands. It gives them a chance to thank all the people who have helped along the way. There have been so many people I could list who have patiently and painstakingly worked with me through Pickle to Pie and all three versions of Something Missing. However, there is an indescribable joy in being able to finally thank them formally, via an acknowledgment page.

It is invaluable for a writer to participate in conferences and to be part of the Historical Novel Society of Australasia. The HNSA provides the opportunity to talk with readers and authors and discuss writing and promoting ideas. The members are so supportive and it feels like you belong to one large family. Why don’t you join us during this stimulating and inspirational weekend filled with talks, feedback and historical writing workshops? Go to HNSA and check out the program. 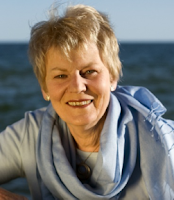 Glenice Whitting left school at fourteen to become a hairdresser. Her journey as a mature-aged student too her from VCE to PhD in creative writing. Her debut novel, Pickle to Pie, was published by Ilura Press. Her latest novel, Something Missing, was launched at Swinburne University in December 2016. Both books are available from Dymocks book stores and at her website. Something Missing is also available though Made Global, Book Depository, and Amazon. Connect with Glenice on her website or on Facebook at Writers and their Journey.

As part of our HNSA 2017 academic program, Glenice will be discuss: The Lie of History: How the mirror of the present shapes the past for its own purposes with Wendy J Dunn, Diane Murray, Gillian Polack and Cheryl Hayden.

Admission to the academic programme is free but bookings are essential. You can find more details about Lie of History session on our website or buy tickets here.

The HNSA 2017 Melbourne Conference is being held on 8-10 September 2017 at Swinburne University.

In addition to the two-stream weekend programme, there will be ten craft based super sessions and two research masterclasses.You won’t want to miss our interactive sessions on armour and historical costumes either! Purchase a ticket and you will be entered in the draw to win a $100 Dymocks Gift Card.