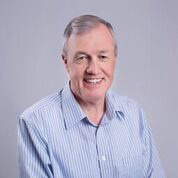 Our guest author today is Michael Beashel. Michael is Sydney-born and his Irish forebears immigrated to New South Wales in 1863 and settled in Millers Point. He spent his youth in Bondi, is married with adult children and lives in Sydney’s inner-west.

Michael was head of Asset Development for a global accommodation services company registered on the NYSE and has made his mark in some of Australia’s iconic construction companies. In Sydney, he has restored government buildings such as the Customs House and the Town Hall, and completed commercial buildings in the private sector. In SE Asia, he managed a construction division that built apartments and hotels in Bangkok and Ho Chi Minh City.

This industry—its characters, clients, trades people, designers and bureaucrats—provides rich material for his writing. He has an eye for the emergence of Sydney’s built form, from the early days of the colony to the present, and a love of construction. He says about his writing, ‘It’s a passion. I revel in using the building industry as a tapestry to weave a great tale seasoned with historic facts and memorable characters. Human shelter is an essential need and I suspect people have a fascination for understanding its context and construction within their societies. Australia still is a young country but there are many, many outstanding building stories.’ 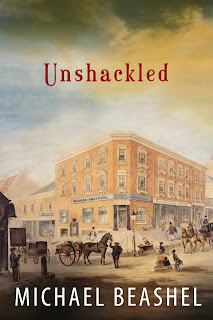 Michael holds a B. App. Science (Building) from Sydney’s UTS and is a member of the NSW Writers’ Centre. Michael finds his excitement in the design and construction industry, military history and Rugby. He’s sailed in Herons but leaves the racing and honours to other family members!  Unbound Justice is his first novel and the sequels Unshackled and Succession complete the Sandstone Trilogy. You can connect with Michael via Facebook, website and blog.

Shelter is the third human need and it’s essential for civilisation to thrive. In genre fiction, the building industry has not been used much as a context although bestsellers like the Pillars of the Earth paint vivid stories and characters against the backdrop of monumental building construction. The intent of my writing is to celebrate the building industry in nineteenth century NSW using where possible historic examples of major works. Architecture of the European period, the Renaissance and early to middle 20th-century America has been given due attention. However the architects of colonial New South Wales, post Greenway, and the contractors who executed their designs are often not given the credence they deserve.

The time period for The Sandstone Trilogy was chosen because it represented a profound change in New South Wales’s history. The first two books date from 1850 to 1857 and highlight the massive expansion of the colony due to the Gold Rush. Wool was certainly adding to the colony’s income but it was the gold that created the explosion.

According to JM Freeland in his Architecture in Australia, a History, ‘the newly rich men of means wanting large and substantial warehouses and offices; town councils wanting magnificent city halls befitting their new-found place in the sun; the churches with coffers filled by affluent respectability- seeking parishioners wanting larger and proper Gothic edifices; the publicans wanting imposing palaces in which to milk a sybaritic clientele and tens of thousands of people just wanting a home—all this created a splendiferous boom for the building fraternity.’

The price of labour and the cost of building materials increased exponentially because of the sheer demand for them. Additionally those tradesmen who were less passionate about their chosen careers were happy to join their fellow gold seekers and try their luck. This sudden ‘vacuuming’ of tradesmen from New South Wales, especially Sydney building sites, created demand for less skilled tradesmen and also promotion for others who would not have normally risen to high ranks at such an early age.


It cannot be overemphasised how much the gold rush affected New South Wales and Victoria.  JM Freeland says that “Australian architecture left its innocence behind when gold was officially discovered in May 1851. The immediate effect of the turmoil on architecture was negative. Building virtually stopped. It was in these conditions that many of these substantial business firms of today were founded. In the period 1851 to 1860 the population of Australia trebled to 1.2 million people. Victoria from 76,000 to 540,000!”

One of the fascinating sources has been a compilation of drawings done by Joseph Fowles and printed by himself in Harrington Street in 1848. St Patrick’s Church in Charlotte Place (present day Grosvenor Street) was dedicated in March 1844. Between King and Market Streets in Pitt Street stood the Royal Victoria Theatre. “The fronts are bold and lofty faced with fine brick with massive stone dressings and cornices. The spirited proprietor Mr Moffit deserves great credit for the liberality with which he has contributed towards ornamenting the city.”

On the social front, one reference written in the era was Mr James Inglis’s account of Sydney and its people. Mr Inglis was a member of the NSW Legislative Assembly in 1885. He wrote a book called, “Our Australian Cousins.”  It was in effect an early example of a traveller’s blog.

York Street was the place to live, especially between Sydney Town Hall and Wynyard square. The merchants’ palaces were selling for £30,000 to build.

Shop windows were small and mean. The structure of each shop jutted out into Pitt and George streets. Horses were hitched to posts and the horses were called walers.

The taxi cabs were elegant, light in draft, roomy and comfortable. They were above the average and the horses sleek and well groomed. The taxi driver charged four shillings per hour, nine pence for a quarter of an hour. 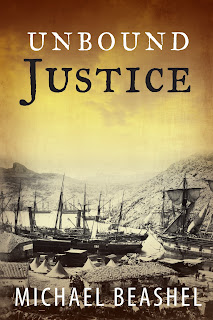 John Leary boards ship in Ireland in 1850, a young carpenter ambitious for a new life in Australia. He sails with revenge in his heart—his beloved sister has been raped by her landlord, William Baxterhouse, who escapes on another ship with even grander plans for success in New South Wales. In Sydney, hard workers like Leary and ruthless newcomers like Baxterhouse find a city fired by the Gold Rush and dedicated to creating the finest buildings in the colony. Leary has a double motive to make his construction company succeed: he has fallen in love with the beautiful Clarissa McGuire, whose family despise him, and Baxterhouse continues to rise in wealth and influence, seemingly untouchable. Meanwhile another woman, Beth O’Hare, is in love with John Leary, and he makes some hard choices—including a climactic showdown with Baxterhouse.

Unbound Justice is the first novel in The Sandstone Trilogy:  a new, magnificent view of nineteenth-century Sydney from the ground up.

Thanks for sharing your insights with us, Michael. Congratulations on the trilogy.