It has been almost a year since I picked up the work of an Australian historical novelist.

The last 'Aussie' novel I read was the epic ‘Shogun’ by Sydneysider James Clavell. It was a work that was full of rich detail and also presented a meeting of two very different worlds: those of Protestant England and feudal Japan. Since historical fiction focusing on the meeting of different cultures has always intrigued me, I decided to pick up ‘The Wedding Shroud’ by another Sydneysider, Elisabeth Storrs, since this read came highly recommended. I should say up front that I really enjoyed this novel and it is one of the best that I’ve read for a while.

Firstly I really enjoyed the setting and the angle, which were wholly original. This may be hard to believe, given that a zillion historical novels have been churned out dealing with Ancient Rome. However Storrs chose to deal with the less frequented period of pre-Imperial Rome, a Rome still struggling to safeguard its own existence. 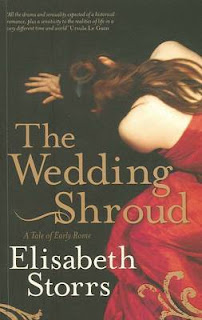 It is a breath of fresh air to read the work of a novelist which deeply examines the differences between Rome and other cultures of its day. We finally have a novelist who saw fit to plant her Roman protagonist in a different culture – not one where the Roman must carry out an act of subterfuge behind enemy lines (as in Rosemary Sutcliffe’s ‘The Eagle of the Ninth’) but one in which a Roman – and more interestingly: a FEMALE Roman - is thrust into a different culture to which she must somehow adapt.

This world is that of the Etruscans (who once held Rome as their colony), who Storrs depicts in profound, intimate detail, with a sheen of care gleaming off every last word. Novels set in the ancient world are renowned to be fiendishly hard to pull off, particularly when they portray a culture of which scant evidence remains. Yet I found that the physical description of the city of Veii and its political intricacies were masterfully achieved, and the ancient city is the perfect setting in which the stoic Caecilia - the main character in this yarn – finds herself repeatedly confronted.

Which brings me to another reason why I respect novels like ‘The Wedding Shroud’. Instead of seizing on a famous character in history, Storrs decides to use a protagonist of her own creation. This is a brave move, because it is known to be much harder to create one’s own main characters, people with their own flaws and strengths that must be convincing upon each turn of the page. Yet this is successfully achieved - giving the narrative more strength – and throughout the story, Caecilia comes across at all times as an ordinary person in an extraordinary situation, which makes for the great historical fiction with which the reader can easily identify.

For it is clear that this is a novel that is the fruit of hard time spent deep in reflection and contemplation, not one that is swiftly cobbled together and sold off the hot press. At no point is a quandary easily solved, and the snatches of action and the exchanges between the characters are credible at all times, as is Caecilia’s thought process. Hers is a situation bursting with real concerns, where every step or false word might have dramatic consequences for herself and her people. Storrs doesn’t treat Caecilia with kid gloves, and readers will find themselves baffled with how to solve certain situations in which the heroine finds herself. At times, there is no straightforward, black and white answer with how to tackle certain problems, just as in real life.

Which also adds to the richness and unique originality of the story, since this is a tale that carefully steers clear of clichés. Without wishing to indulge in any spoilers: Caecilia’s husband Mastarna is said not to be good looking, yet he is a man who understands her differences but also challenges them. The way the relationship evolves between them is also entirely plausible and therefore moving. It is always satisfying to read about relationships and characters that are grey and multi-faceted, in a story where there is no good vs evil nor black vs white.

This read was pure infotainment and as a reader, I simply could not ask for further enlightenment. For those wishing to learn more about the Etruscans, their thirst will be more than quenched by this novel, which will teach you everything you wish to know and more.

Email ThisBlogThis!Share to TwitterShare to FacebookShare to Pinterest
http://colinfalconer.wordpress.com/2012/07/04/the-20-worst-book-covers-ever/
Posted by James Vella-Bardon at 7:22 PM No comments: