‘The past is a foreign country: they do things differently there’ is the opening line of ‘The Go-Between’, a novel by L.P.Hartley.

By this, he meant that the world of the past is as strange and unknowable to us as a country to which we’ve never been and whose language we cannot speak.

Yet that it is what historical fiction authors do – we bring the world of the past to life, we bridge that abyss of the unknowable. To do this, we not only have to re-create places and times that are long gone, but imagine ourselves into the minds and hearts of people whose mindset were very different from ours.

A difficult challenge for any writer.

Imagine then, if an author set out to not only illuminate the past, but also to write about a foreign country whose language she doesn’t speak.

Not yet enough of a challenge for you?

That is just what I did in my latest novel.

‘Bitter Greens’ is a retelling of the Rapunzel fairy tale, interwoven with the true life story of the woman who first told the tale, the scandalous French noblewoman Charlotte-Rose de la Force.

The sections told from her point of view are set in Paris and Versailles in the late 17th century, during the reign of the Sun King, Louis XIV.

The Rapunzel narrative is set in Venice and Lake Garda in the 1590s.
And then, just to make things more complicated, I wrote a third strand of the story, told from the point of view of the witch, which is set in Venice in the early 16th century.

Sometimes I truly thought so.

My task was complicated by the fact that I speak very little French or Italian, and that one of my characters had truly lived, yet but was nothing but a footnote in history.

Every reference to her in every book I could find was no more than a line or two long.

And I wanted to write a novel about her.

At times the challenges seemed insurmountable.

Apart from anything else, I needed to keep all the historical minutiae straight. For example:

In 16th century Venice, women wore stiff, long-waisted bodices and heavy skirts over cone-shaped farthingales, with gabled hoods on their heads. On their feet they wore totteringly high, wedge-shaped, wooden chopines to protect their fragile silk slippers from rising water.

In 17th century Paris, women wore loose mantuas with unboned bodices, the skirt pinned back to show lacy petticoats, and towering fontanges on their heads made of lace and ribbons sewn over wire. The height of one’s heel was strictly controlled by sumptuary laws – the king’s heels were the highest, and then the queen’s, and so on down to the peasants who were allowed no heels at all.

In 16th century Venice, latrines emptied directly into the canal.

In 17th century Paris, women employed pages to carry their own personal close stool to parties.

In 16th century Venice, people drank rough red wine and ale (beer brewed without hops which were not yet commonly grown).

In 17th century Paris, pink champagne was all the rage.

Quite simply, the answer is I wrote each narrative thread in its entirety before moving on to the next.

I began with the story of Charlotte-Rose de la Force, who was a maid-in-honour at the court of her second cousin, Louis XIV. Her story begins in 1660 and ends in 1697. I read everything I could find about the court of the Sun-King – its fashions, its food, its customs, its etiquette – and I hired a French translator to help me since many of the first-hand accounts of the Versailles court had never been translated into English. Similarly, the only book ever written about Charlotte-Rose’s life was written by a French academic, and never translated. With her help, I was able to read the letters and diaries of noblewomen at the court, and I was able to read Charlotte-Rose’s own writings – her fairy tales and her autobiography. I wrote her entire story from beginning to end, indicating where I thought I could break to insert the other narrative threads.

Then I wrote the Rapunzel sections. My heroine was called Margherita and her tale begins in Venice in 1590 and ends in Florence in 1600.

Once again I immersed myself as fully into the historical period as I could. I began a new notebook, keeping all my notes, ideas and research separate from the notebook about Charlotte-Rose de la Force. I read books with titles like ‘Daily Life in Renaissance Italy’ and ‘Inside the Renaissance House’. I studied books on early opera and Venetian beauty regimes. I read articles about Rapunzel syndrome (a life-threatening illness caused by tricophagia, or the eating of one’s own hair). I cooked Italian food.

When Margherita’s story was told in its entirety, from first word to last word, I wove it into Charlotte-Rose’s story, making sure the chapters echoed each other in same way, and were balanced in length and pacing.

Only then did I begin to research and write the story of Selena de Leonelli, the courtesan who locks Margherita away. Her tale begins in 1504 and ends in 1582, and features the great Italian Renaissance painter Tiziano (known in English as Titian). This time I immersed myself in the world of the Venetian courtesan. I read up about stregheria, Italian witchcraft. I spent hours examining Tiziano’s paintings minutely for every hidden symbol and painted-over brushwork. I read about the Venetian Inquisition, and the practise of castrating young boys to preserve their youthful voices.
I wrote Selena’s story, and then found the exact right place to put it – in the very middle of the book. It became the dark heart of the novel. Charlotte-Rose and Margherita’s story weaves into it, and then weaves out of it, the whole understanding of the novel inverted and changed as a result.

It was like writing three separate novels - each one its own small foreign world, with its own language and laws, customs and conventions.

I’ve always liked a challenge, though.

I first remember hearing about the Montmaray books over at Danielle's blog. There's a certain irony when you find out about books by Australian authors at an American blog, but these things happen! It sounded like my kind of read and so when I was given the opportunity to read it (because it has recently been rereleased here as a Vintage Children's Classic) this seemed like a good time to read the book for myself.

The book is told in diary format with the author of the diary being a young girl name Sophie, or more correctly Princess Sophie of Montmaray and covers the months towards the end of 1936. Once Montmaray was a small but flourishing island nation but the Great War and the subsequent Spanish flu has decimated the population. Now there are only a few villagers who live on the isolated island, struggling to make a living. Of the royal family, Sophie and her sister Henrietta live in the 'castle' along with their cousin Veronica and their uncle King John who is a shadowy character on the edge of their lives who seems to be dealing with some form of madness. The heir to the throne, Sophie's brother Toby, is living in England, going to school and mixing with the best in society. He is accompanied by the housekeeper's son, Simon, who also has suddenly become the focus of Sophie's daydreams.

For quite a while. the diary entries reflect day to day events of what essentially is life in a crumbling castle on a big rock in the middle of the ocean. The people of the island rely on passing boats to communicate with the outside world. If they need a doctor they have to hoist a specific flag to the top of the flagpole and wait for one of the passing boats to stop and offer up assistance. Sophie's younger sister Henry is a tomboy who refuses to sit down and be educated. The castle is falling apart so there are leaking roofs, dwindling supplies and more. All of those worries become somewhat less important when two German soldiers land at the island, looking for a specific artifact that may or may not be connected to the island nation. In the space of just a couple of days, absolutely everything changes for the people who call Montmaray home. The final third of the book morphs into a bit of an adventure story as there is danger and intrigue and just a touch of romance that it is very subtly implied. 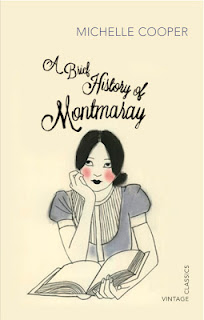 Whilst this book covers a lot of ground historically, it is not straight historical fiction. The island nation of Montmaray is fictional and so therefore are the majority of the characters and the role that Montmaray plays in European history. Having said that, Cooper covers a lot of historical ground with mentions including Henry VIII,  Napoleon and the rise to power of the Nazis in Germany along with lots of other historical figures and events. The mix between real events and made up is really well handled and in this new edition there are notes to help young readers know what is real and what isn't.

When a book is well written using the diary format, it is a thing of joy. All too often a diary format can feel restrictive in terms of view point and narrative. In this case, the diary format works primarily thanks to the voice of Sophie which is engaging and charming from beginning to end.

I was trying to fit this book in around other reads and so was intending to read a chapter a day. There were plenty of days though when I ended up reading more than one chapter as this book was more engaging than the other book I was reading!

I was charmed by the characters, setting and historical context, so I will be very much looking forward to renewing my acquaintance with the royal family of Montmaray sooner rather than later!

Thanks to the author who supplied a copy of the book for review. She also guest posted for us at Historical Tapestry, telling us why she loves to read and write about 1930's England.

'This is what happened tonight, every single terrible thing that I can remember . . .'

Sophie FitzOsborne lives in a crumbling castle in the tiny island kingdom of Montmaray, along with her tomboy younger sister Henry, her beautiful, intellectual cousin Veronica, and Veronica's father, the completely mad King John.When Sophie receives a leather journal for her sixteenth birthday, she decides to write about her life on the island. But it is 1936 and bigger events are on the horizon. Is everything Sophie knows and loves about the change?