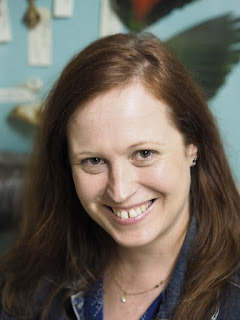 It’s a great pleasure to welcome to the blog Dr Melissa Ashley, a fiction writer, poet and academic who teaches creative writing workshops at the University of Queensland. Melissa is the author of the historical fiction, The Birdman’s Wife (Affirm Press, 2016), about the incredible life of the nineteenth-century illustrator, Elizabeth Gould, the wife of John Gould, the ‘father’ of Australian ornithology. Melissa has published papers and articles in Hecate, Text Journal of Creative Writing, Double Dialogues, The Age (Spectrum), The Lifted Brow and others. Her current project explores the life and writing of a seventeenth-century French author of fairy tales. You can connect with Melissa via her website, or through twitter, Facebook and Instagram.

When I was in grade 4, I had a story published in the Catholic Leader, about a visit to the circus, and I still remember the thrill I felt at seeing my name in print. My teacher and parents encouraged me, my father even buying me software for our commodore 64 computer to help me out. I always loved creative writing at school.

It all started when I fell in love with a poet, and with his poem about a bird.  We became avid birdwatchers together.  Writers, too.  When he rescued a ringneck parrot and we adopted it as a pet, a friend gave me a book about birds and a biography about John Gould, the famous ‘father’ of Australian ornithology.  That was how I discovered that his wife, Elizabeth, created the beautiful images of birds he wrote about in his exquisitely illustrated folios. She was portrayed as such a shadowy figure yet her work as an artist was so key to his fame and the history of birds that I became enthralled with her. I began researching Elizabeth’s life in earnest and the more I learned about her, the more determined I became to uncover her story.

I suppose the most important is that of bringing a fascinating woman, who made important contributions to lithography and zoological illustration, out from the shadow of her illustrious husband. 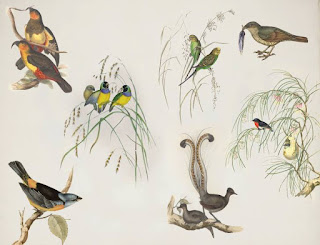 None in particular. I love 20th century history. I’m currently immersed in the late 1700s for my new novel. And I have plans to explore the 18th century and also the 20th century in future works. It’s a fun way to learn a particular area of history, depending on story and that particular historical milieu.

I’m a researcher by training and I love nothing more than digging into files and archives. For Elizabeth’s story that meant 1830s London and Australia; ornithology, zoological illustration, voyages of exploration, childbearing practices. I’d outlined the plot but there comes a point when you feel an itch to start the first scene of the first chapter. I came to a stage where I felt I had spent enough time with printed books. I needed to follow in the footsteps of my heroine and get out into the field, go birdwatching, learn bird-stuffing and, ideally, to handle archival materials that Elizabeth Gould made herself, which I was finally able to do in the State Library of NSW. The discovery of her letter book in John Gould’s papers helped me to make that jump from the biographical Elizabeth to imagining her emotional journey, her personal experiences and challenges, as the narrator of The Birdman’s Wife.

I am a slow writer and as noted, I love research. I research, maybe for six months, with various levels of intensity. I read novels about the era, biographies, histories, etc. I then begin writing a draft, I get stuck and turn back to research. I also really like automatic, timed writing exercises, and use these when I’m feeling a bit lost, and in particularly, to discover more about a character. I keep very messy and disorganised journals.

I write in bed sometimes.

How long does it generally take you to write a book?

The Birdman’s Wife took four years to write. I hope to cut the time down to 2 – 3 years for my next work. I teach and have children, so life often disrupts the process, as it is for most writers.

I think it takes a particularly tenacious personality to succeed as a writer. Be patient. Listen to feedback and critiques. Read passionately. Redraft, review, revise. Keep sending out work. Listen and grow. It’s a really tough gig, and in your heart of hearts, you need to really want to pursue writing as a career.

Thank you for joining us on the blog today Melissa. The Birdman's Wife is available now. You can find more about it here and purchase it here. 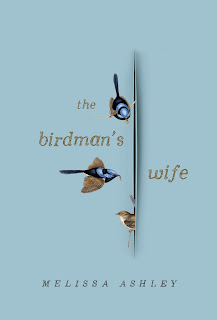 John Gould created the most magnificent works on birds the world as ever seen. But the celebrated ‘birdman’ had a secret weapon – his artist wife, Elizabeth. Inspired by a diary found tucked inside her famous husband’s papers, The Birdman’s Wife imagines the fascinating inner life of Elizabeth Gould, who was so much more than just the woman behind the man.

Elizabeth Gould was a woman ahead of her time, juggling the demands of her artistic life with her roles as wife, lover and helpmate to a passionate and demanding genius, and as a devoted mother who gave birth to eight children. In a society obsessed with natural history and the discovery of new species, Elizabeth Gould was at its glittering epicentre. Her artistry breathed life into hundreds of exotic finds, from her husband’s celebrated discoveries to Charles Darwin’s famous Galapagos Finches.

Fired by Darwin’s discoveries, in 1838 Eliza defied convention and her own grave misgivings about leaving all but one of her children behind in London in the care of her mother by joining John on a trailblazing expedition to the untamed wilderness of Van Diemen’s Land and New South Wales to collect and illustrate Australia’s ‘curious’ birdlife.

From a naive and uncertain young girl to a bold adventurer determined to find her own voice and place in the world,  'The Birdman’s Wife'  offers an indelible portrait of an extraordinary woman overlooked by history, until now.

Thank you for sharing your story with us, Melissa and good luck with your current novel.

THE MODERN VOICE IN HISTORICAL FICTION
Writing styles have altered over the years. Should an historical novelist cater for the tastes of 21st Century readers by introducing modern expressions and dialogue in their novels? Is it valid to introduce current sensibilities to characters who would otherwise have been constrained by their own societies?

Authors Kate Mildenhall, Melissa Ashley, Greg Pyers and Luke Devenish discuss with Eleanor Limprecht  how historical novels have changed over time, and how they approach writing authentic characters true to their period.

You can find out more about the session here.

Early bird registration is open for the HNSA 2017 Conference. You will receive 15% off the full price for our weekend programme.  The same discount also applies for tickets to our opening reception.

Visit our website to takeadvantage of our early bird discounts.