Our guest today is Peter Watt, who has just released his latest novel When the Moon Burns. Peter has been a soldier, articled clerk to a solicitor, prawn trawler deckhand, builder's labourer, pipe layer, real estate salesman, private investigator, police sergeant and adviser to the Royal Papua New Guinea Constabulary. He has lived and worked with Aborigines, Islanders, Vietnamese and Papua New Guineans and speaks, reads and writes Vietnamese and Pidgin. He is also a firefighter with the N.SW Rural Fire Service. 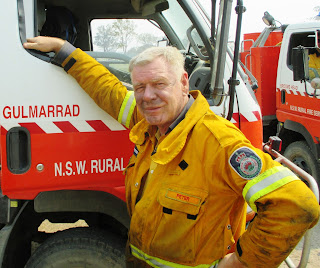 Like many with the writing gene I knew from a very early age that I wanted to write.  In the 1960’s I read every author I could such as James A Mitchener, Leon Uris, James Clavell, Wilbur Smith, John Steinbeck and many others.  I was drawn to the history and sweeping stories written by the great authors mentioned.

The inspiration that drove the newly published While the Moon Burns was our place in history in the years 1945 to 1951.  It has been the theme throughout all the Frontier series which has taken the reader of this series from the Queensland frontier of 1862 onwards.

The theme is incorporated into the ongoing generations of the two families. That is, the reader of the Frontier series observes the changes to our attitudes influenced by the national and international events of the time.

I guess the history of the 19th century has the most appeal as it was a century of rapid technological change, colonialism and the century when we grew our own culture in Australia.

Research is primarily done through the use of personal eye witness accounts found in libraries and old photographs. The old saying that a picture can speak a thousand words is true. The internet is a good source of specific things such as names of characters pertinent to the time written about.

I allow history to guide the actions of my characters.

If any thing research can get a writer into trouble.  I remember once going to my library to research women’s underwear in 1868.  I found a couple of books on the subject, as I required the information for a seduction scene where the hero undresses the heroine.  I booked them out, and heard one librarian say to the other as I was leaving, “Ï think that man must be some kind of pervert.”

How long does it generally take you to write a book?

I devote six months to fighting bushfires which generally sees me out every second day on one fire ground in the fire season.  So, my research and writing is the other half of the year -generally through the colder, wetter months. That does mean a 10 hour day, seven days a week.

My first book, Cry of the Curlew was originally rejected for main stream publishing.  A letter from the publisher explained why it was not up to standard, and I rewrote the book to comply with what was required by publishers.  The second time around it was recognised as what the public wanted in a mass market release.  The books are now in many languages -and the rest is history. The advice I would give originates in my army days when I was fortunate enough to do a course with the legendary Australian Army Training Team Vietnam as an advisor.  They had a shoulder patch that had one word which has stuck with me in many things I have done in life – PERSEVERE!

Thanks for sharing your experience Peter. All the best with your new book! 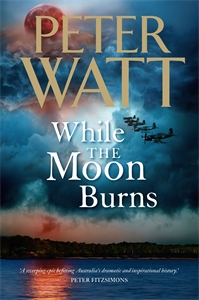 With tense and immediate battle scenes, a blockbuster plot
and unforgettable characters, Pter Watt has crafted a
sweeping epic befitting Australia's dramatic and inspirational
history.'
-
Peter FitzSimons
From the jungles of the Pacific to the boardrooms of Sydney, the
stakes have never been higher when you're fighting for love and
survival. And while the Duffy and Macintosh families may fight on
the same side in one war, the battle between these two famili
es is
far from over.
For Tom Duffy, the purchase of his ancestral property Glen View means his daughter will have a
home to return to after the war and, hopefully, for the next generation of Dufs. But the Macintosh
family won't let this land go without a
fight and when Sarah Macintosh, the daughter of his old
nemesis, challenges his ownership, he knows he's in for one hell of a fight.
Meanwhile in Sydney, Sarah has taken over from her father as the head of the Macintosh firm
and, while the Nazi investment
s she made might be in tatters, she has big plans for herself and

the family business. And Sarah she isn't afraid of playing dirty.

While Sergeant Jessica Duffy, Captain James Duffy and Major David Macintosh have managed to
make it this far through the lon
g war, will all they are fighting for still be waiting for them when they
return home?

In the war across the seas, the Duffys and the McIntoshes are on the same side. But on home turf, the battle between these two dynasties rages on. After fighting in two world wars, Tom Duffy's purchase of his ancestral property, Glen View, means a home for the next generation of Duffys. But the Mcintosh family won't easily surrender this land, and when they challenge his ownership he knows he's in for one hell of a fight. Meanwhile in Sydney, Sarah has taken over from her father as the head of the Mcintosh firm. She has big plans for herself and the family business, and isn't afraid to play dirty. Sergeant Jessica Duffy, Captain James Duffy and Major David Mcintosh have survived countless battles the world over, but will all they are fighting for still be waiting for them when they return home.

Enjoy this post?  Subscribe to the HNSA newsletter to receive more author interviews and guest posts. And you'll be the first to hear about early bird registration for the HNSA 2017 Melbourne Conference on 8-10 September 2017.