A Michelin Guide to a Story Idea

I am absolutely thrilled that over the last few months my cross genre story (mystery, history, romance and ghosts!) , GATHER THE BONES,  has received a number of award nominations:  Australian Romance Readers Association, CRW Award of Excellence, GDRW Booksellers Best Award and the 2012 Rone Award.  It may not be the eventual winner but for a story that does not sit in any one genre, it is a pleasing recognition that cross genre stories can interest readers.

Writers are often asked where they get their idea for a story.  Inspiration can strike in the most unexpected ways and sometimes there is no one trigger point for a story.

The inspiration for GATHER THE BONES, which is set in 1923, came from a number of different sources but it is, perhaps, a little brown book--“Ypres and the Battle for Ypres 1914-1918, An illustrated history and guide” published by Michelin--  published in 1920 that I found at the back of my parents bookshelves that sowed the seeds of my hero, Paul Morrow’s, war.

It seems extraordinary that less than two years after the end of the war there was already a tourist industry around the battlefields, but the clue comes from a little insert on the town of Ypres which describes it as the “Centre for English, French and American Pilgrims”. In this little leaflet are advertisements for “Touring Cars” (wreaths by arrangement “placed on graves and photographed”), Hotels bearing the names “The Splendid” and “Hotel Britannique”. A good cup of tea in three minutes can be obtained from the Patisserie and Tea Rooms of Mme Ve Vandaele on the Grand Place.

We are informed that during the Great War, Ypres was bombarded continuously for four years and 250,000 British fell defending the city. “Today Ypres is being quickly reconstructed,out of 5,000 Houses destroyed, 3,000 will have been rebuild by the end of 1923; thanks to the tenacity of the Population and financial help from the Belgium Government”

“A number of quite up to date Hotels, providing every comfort:  Central Heating, Electricity, Baths etc are already in full swing. ..The country around is agricultural, with villages and farms being rebuilt once more...Every convenience and comfort for Pilgrims and Tourists is to be had in Ypres...”

So in our imaginary world we have hired our touring car (with a British Driver), fortified ourself with a three minute cup of tea and off we go. The most extraordinary thing about this little book are the illustrations:  Before and After shots of little towns, chateau, woods and churches. Our touring car is pictured driving down a road lined by the broken stumps of trees.

My husband and I visited modern Ypres in 2005. Even ninety years after the last gun was silenced, the bodies of the missing were being discovered and a reinternment was occurring while we were there.  I tried to imagine what it was like for the families of those young men who had no graveside to mourn and slowly the idea for Gather the Bones took shape.

In that non descript little book I had the images of the battlefields, the trenches, the concrete machine gun posts but more importantly I had the pilgrimage.  Evelyn Morrow, Charlie’s mother, has to see where her son died, to really believe he is dead.  It was the Evelyns who bought the 1920 Michelin Guide, booked the Hotel Splendid, bought their wreath and in their hired touring car, laid their ghosts to rest.

To find out more about Alison and her books, visit her website, www.alisonstuart.com and to read an excerpt from GATHER THE BONES, click HERE. 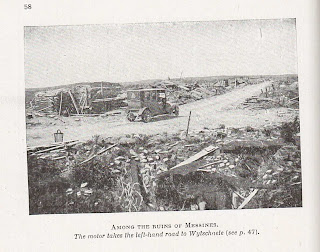 Blame It On Google (or What Was I Thinking??)

My life of being a sole charge physiotherapist and EMT in a remote rural community was pretty normal. The usual assortment of injuries (bruises, broken bones, sprains, etc.  - my patients’, not mine!) filled my days until a very unusual item came up in a Google search for a medical condition: women pirates.

What the heck? I didn’t even know that there were such things. Curious, I clicked on it and began to read. Well, it turns out that not only were there such characters, but there were many of them, and the lives and adventures of most of them were very well documented. In particular, I read about Anne Bonny and Mary Read, who, stranger than fiction, both disguised themselves as men, and quite by accident, ended up sailing on the very same pirate ship in the 1700’s through the West Indies. I read on, learning that these two ladies were described as being more determined and fearless than most of their male crew members, as they fought and pillaged their way up and down the Caribbean coastlines. Now this was good stuff - treasures, sea battles, brutal medical procedures, hurricanes, and swordfights!

Being that these two female pirates were already well documented by writers who were much better writers than I, I didn’t dare try to retell their stories, but I thought that I could write my own story filled with characters from that era and lifestyle, and just let my imagination go wild. And, oh yeah, maybe throw in a few historical facts now and then, just to add realism. Boy, was I misguided!

It took only one sarcastic comment from an acquaintance to set me straight: “You are a prairie girl. You don’t sail. You don’t fight. You’re not even a history buff. What on earth makes you think that you could, or even should write about that stuff?”

Sometime during the pity party that I immediately had for myself, my hurt feelings morphed that comment into a challenge. I began to research. Several months later, I had ordered in so much reference material, that I was on a first name basis with every librarian in our library, and had tables ( yes, tables!) full of binders, notebooks, scraps of paper with details that I felt I needed to know. I also visited several marine museums, and did short sails, even attempting once to haul the main sail up on a tall ship, but failing miserably; I talked with sailors, strolled through historical sites, hoisted real cannonballs, and made my own grog out of dark rum. (After all, I wanted to involve all my senses, right?) And I began to write.

I became immersed in life in the 1700’s. In my mind as I wrote, I saw my characters, felt the tilt of the ship’s planks beneath my feet (ahem, ... there may have been a little of that grog involved there), and at one point, while writing a sea battle full of cannon and musket fire,  I thought I could actually smell the smoke. Turns out it was just my neighbor’s barbeque.

Nevertheless, a few months down the literary road, QUINTSPINNER – A PIRATE’S QUEST was published. The story ended up having both a strong female and male protagonist (I am mother to two daughters and four sons and I had to keep peace in the family.) I held a book launch party complete with a pirate theme, sea shanties, author reading and book signing, sea food platters, and a surprise enactment of one of the book’s scenes by a local drama group, all looking and acting very pirate-ey. The launch party lasted several hours and attracted over 150 people.

Then, much to my surprise and delight, my novel went on to win multiple awards, including Best Historical, Best Commercial Novel, Best Beach Read, Best YA, and Book of the Year awards. At one point, I was in contact with Tyler R. Tychylaar, Ph.D, historian, and noted historical author, and we discussed writing in the historical genre. He stated that it was generally agreed that the historical genre is the hardest one to write in because of the amount of time and effort that the research requires, above and beyond producing all of the ingredients that make up a great novel.

I hadn’t given a shred of thought to this when I started out. I wrote only for the sheer joy of storytelling, and the fun of weaving historical fact into a tale of adventure. But when Quintspinner neared  the end of an acceptable length, there was still oh-so-much more story to tell, not to mention the rest of the yet-unused, often juicy, historical details that my research had unearthed, just sitting on those tables, whispering to me. And those whispers most decidedly told me that it was going to be an historical series that I was writing.
“What??” That was the logical side of my brain chiming in. “What are you thinking? More historical? The hardest genre to write in, remember?”

And then I heard my heart and imagination reply simultaneously. “No worries,” the two of them soothed as I was swayed.  “Remember how much fun it was? Why not help yourself to a mug o’ the grog and let the storytelling begin!”

Now a year later, DEADLY MISFORTUNE, Book Two in the Quintspinner series has been published and it too, has won an award in Best Historical division. And fearlessly sailing forward, just like Anne Bonny and Mary Read, I am already writing Book Three and still enjoying every detail along the journey.