Felicity Pulman: Researching and writing 'A Ring Through Time'

HNSA is delighted and honoured that Felicity Pulman will be appearing at the inaugural HNSA conference on 20-22 March 2015. In this guest post, Felicity gives us insight into researching and writing her wonderful new book, A Ring Through Time.

Felicity is an award-winning author of numerous novels for children and teenagers, many of them inspired by historical events both here in Australia and in the UK. Ghost Boy has a flashback to the grisly past of Sydney's Quarantine Station in 1881, and is in the early stages of film production. A Ring Through Time tells the story of a doomed romance from the time of the second penal settlement on Norfolk Island. Her medieval crime series, The Janna Mysteries, is set in England at the time of the 'civil war' between King Stephen and the Empress Matilda, while the Shalott trilogy is a medieval fantasy based on the legend of King Arthur and Camelot. Felicity has many years experience talking to both adults and children about her books, and conducting workshops in various genres. Her short stories (for adults) have won prizes, including the inaugural Queen of Crime Award, and have been published in magazines and anthologies around the world.Her latest novel (for adults) titled I, Morgana, is currently under offer from a leading Sydney publisher.

Mostly writers choose the story they’re going to write, but sometimes characters choose the author they want to tell their story. This happened to me while on holiday at idyllic Norfolk Island some ten years ago.  We went snorkelling at Emily Bay and, as I put my face down to view the world underneath the water, I heard a voice say, ‘If only I could see my own life as clearly as I can see now.’
Who was this girl, and why was she talking to me?  I had no idea, but I've learned to pay attention to the voices and visions that periodically visit me, and so I made notes and collected info on what turned out to be a fascinating holiday.
The main focus of island life nowadays lies with the relocation of the descendants of the Bounty mutineers from Pitcairn Island, who were ‘given’ the island by Queen Victoria, although this is now something of a bone of contention between those who want complete autonomy for the island and those who either appreciate Australia’s contribution (there’s an administrator there plus a number of personnel including police and teachers) or who would be happy to come under Australia’s aegis altogether.
What fascinated me, however, was the dark and grisly convict past, the ruins of which lie scattered around the island but are mostly concentrated around the shoreline of Kings Town (Kingston) and along Military Road (Quality Row) behind. There were two convict settlements on the island, the first established by Lt. Philip Gidley King in March 1788. It comprised male and female convicts (who at that time were there to supply manpower rather than for punishment) along with volunteers to establish a colony (and thus keep the island out of French hands) and to harvest the flax and pine trees that grew there in abundance.  The settlement battled immense hardship, not least the problem of no safe harbours for ships bringing in supplies: a difficulty that still exists today. The settlement was finally closed in January 1814, but reopened in 1825 largely as a result of overcrowding in convict settlements on the mainland but also with a view to housing the most incorrigible of the convicts away from mainland settlements.
Thus the Second Penal Settlement came into being, a men-only settlement and a place of indescribable barbarity and cruelty under a succession of commandants, with the exception of one: the visionary reformer, Alexander Maconochie.
I walked around the ruins, soaking up the atmosphere and learning what I could about the past.  On my return home I opened a folder and filed away the notes I’d made and the information I’d collected.  And there it lay for a long time until, a few years ago, when I’d reached a crossroads in my writing life and couldn’t see a way forward.  I decided to apply for a May Gibbs Writing Fellowship, using the notes I’d made as the basis for a story set on Norfolk Island. I was lucky enough to be awarded the chance of a month’s writing time at a studio in Adelaide, at which time panic set in.  I’d put forward a proposal but, for me, it didn’t really have legs and I wasn’t at all sure I’d be able to produce a credible novel.
I was still in panic mode when my husband and I flew to Adelaide a week early for a short holiday on the Murray River before I started work.  It was a delightful trip on an old paddle steamer, but for me the turning point came when we visited the museum at Swan Reach, one of our stops.  There, in a display case, was a collection of mourning brooches and assorted jewellery made of hair.  I don’t know if there was a hair ring among them, but I ‘saw’ one, and that was when everything clicked and fell into place.  What a relief!! 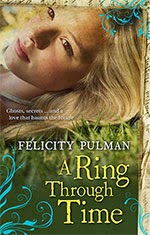 Allie Bennett has moved to Norfolk Island with her family, and as the texts and phone calls with her friends back in Sydney dwindle, Allie feels increasingly alone. The instant attraction that occurs between Allie and her classmate, Noah O'Brien, is threatened when he keeps reminding her that she is descended from John Bennett, the brutal commandant who oversaw the penal colony 150 years ago and made the lives of the convicts, including Noah's ancestor, a living hell. When the discovery of a hidden diary catapults Allie into the tragic story of two young long-dead lovers, she is appalled at the injustice detailed in the diary and vows to put things right. But digging up the past has the potential to damage reputations and end her relationship with Noah. It will take a token of love - a ring made from hair - to solve the mystery of what really happened so long ago, and lay the past to rest.

Many thanks, Felicity, for providing your wonderful guest post. I can't wait to see the movie of Ghost Boy, and hear you speak at the HNSA conference in 2015!

Please consider visiting us on Twitter and Facebook to help us spread the word!
Posted by Elisabeth Storrs at 11:18 PM No comments: