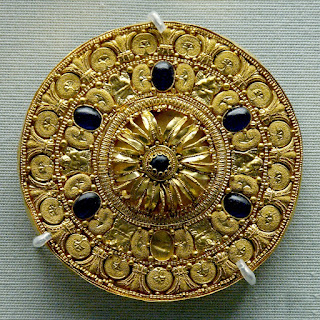 The world of the Etruscans has always fascinated me. So much so I spent ten years researching their culture for my novel, The Wedding Shroud. Theirs was a sophisticated  society situated in the Italian regions we now know of as Tuscany, Umbria and Lazio. While the nascent Republican Rome was still scrapping for ascendancy in Italy against the other Latin tribes, the Etruscans had established a sea empire that spread from north Africa and Egypt up to France and the Black Sea.

Etruscans loved shiny things. The more glittering and ornate the better. The most stunning examples of jewellery and art came from the era known as the ‘Orientalizing’ period from ca. 720-575BCE. This was a time when Phoenician and Greeks were attracted to Etruria due to its rich metal deposits. The Phoenicians were a sea faring people with extensive trading interests across the ancient world. Originally from the area we now know of as Lebanon, they also set up a colony in Carthage (modern Tunisia). Through their trading links, goods from Egypt and Assyria were imported into Etruria and graced the houses of the wealthy.

Enormous bronze and silver mixing bowls were decorated with mortal and mythical animals: scarabs, panthers, winged lions, chimeras and sphinxes.  Ivory inlaid boxes were popular as well as faience vases (tin glaze on earthenware) and even decorated ostrich eggs (a symbol of fertility). Strange glass ‘porcupine’ vases in the shape of tiny coloured glass jugs with spiny bodies have been found and glass beads were used to decorate fibulae (brooches) and necklaces. Amber was popular and of course – gold. Sophisticated techniques that involved filigree, engraving, repousse (hammered relief decoration) and granulation (where tiny grains of gold were soldered to cover the surface of an object) were all employed by gold smiths to stunning effect. 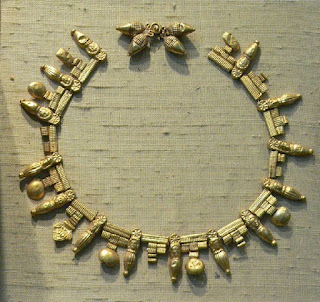 Etruscans covered themselves with jewellery such as golden wreaths, necklaces with heavy ball shaped pendants, rings and bullae (lockets). Some pendant earrings were four inches long or were shaped in heavy grape clusters. Tiers of tiny gold beads were strung together as bracelets or diadems. And all this finery was kept in cylindrical containers known as cistae which were divided into compartments where mirrors, combs and perfume bottles were stored.

So when you think of designer jewellery –or stylish home wares– the Etruscans paved the way.

The images are of an intricately fashioned gold ear-stud decorated with a rosette surrounded by concentric bands and with vitreous glass paste insets (530–480 BC. British Museum) and a
5th to 4th century BCE Etruscan necklace now displayed at the University of Pennsylvania Museum of Archaeology and Anthropology. (Wikipedia Commons.)

More examples of Etruscan jewellery can be found here

Elisabeth Storrs is the author of The Wedding Shroud - A Tale of Early Rome. Read more of her posts at Triclinium blog.
Posted by Elisabeth Storrs at 10:10 PM 1 comment:

History and Women: MEMORIES OF ANASTASIA

History and Women: MEMORIES OF ANASTASIA: When I wrote Anastasia ten years ago there was still a lingering doubt about whether she had survived the botched execution in which th...
Posted by James Vella-Bardon at 6:58 AM No comments:

Pirates of the Levant (Novel Review)

This is the latest instalment in the adventures of Captain Alatriste. I am an avowed fan of the Alatriste series, the first of which remains one of the best historical novels I've ever read. The books match - if not exceed - my passion for Bernard Cornwell's 'Sharpe' yarns which are mainly set during the Peninsular war.

For the uninitiated: the novels describe the adventures of Diego Alatriste y Tenorio (a veteran of the 17th C. Spanish army) and his adopted son, Inigo de Balboa, during the reign of King Philip IV in 17th Century Imperial Spain. 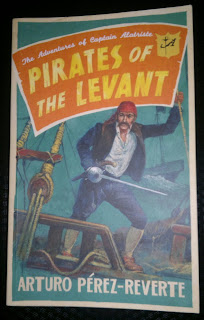 I would say that the Alatriste novels encapsulate the very spirit of Imperial Spain, which is probably why they are so popular in Perez-Reverte's country of origin. These are stories set against the decaying canvas of the latter days of the Spanish Empire, which marry heightened political intrigue with swashbuckling adventure. In 'Pirates of the Levant', there is certainly more of the latter but little of the former, and indeed I would say that this story is a rambling series of events rather than a plot whose intrigue is steadily built up from the first chapter onwards.


The book's main strengths remain Perez-Reverte's hilarious black humour and his meticulous attention to historical detail - although his account of Alatriste's visit to Malta left a bad taste in the mouth. Being an aficionado of Maltese history / Melitensia, I found it quite amazing (if not insulting to the Maltese people) that the island's patron saint was referred to as Saint Peter instead of Saint Paul, and the novel also contained other errors e.g. stating that the siege of Malta of 1565 lasted 'four years' instead of 'four months', and also mispronouncing the name of the proud town of 'Senglea', referring to it instead as 'Sanglea' (amongst other highly irritating errors).


I was completely gobsmacked by this, because one of the usual strengths of this series is the author's intricate accuracy when referring to all aspects of the period. I can only imagine that these mistakes were made when the novel was translated into English, for it is very unlike Perez-Reverte to commit such howlers.


My other observation after reading this book is that the novels in the Alatriste series can be divided into two groups: those that refer to the intrigues between Alatriste and his enemies in King Philip's court (which by far possess the more engaging plotls), and those that portray Alatriste going through the motions which are typical of a Spanish swordsman of the time e.g. partaking of war in Flanders (The Sun Over Breda) or seeking his fortune in the Mediterranean (Pirates of the Levant).


Whilst the latter batch of Alatriste novels are worth reading for the education which can be derived from them (sloppy errors when referring to Maltese history aside), I find that the entertainment value is greatly diminished when the captain's enemies in the King's court and in the Holy Inquisition are not included in the story. I also find it painfully predictable that the Captain and Inigo receive a letter from both Quevedo and Angelica (in that same order) whenever they are outside of Spain (although it beats me how the letters can find Alatriste and Inigo whilst they are both sailing across the Mediterranean with no specific direction during the 1600s). 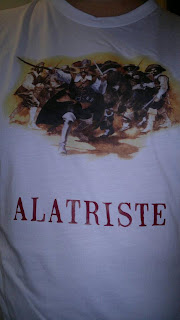 This is quite a shame for it is usually very unlike Perez-Reverte to be predictable, which is another strength of a series which thrives on gritty realism. However 'Pirates of the Levant' (not to mention its predecessor 'The Man In The Yellow Doublet' - which was far too 'Hollywoodian' for my liking) smacks too much of formula, which is something I had never previously equated with Perez-Reverte's potboilers.


In truth the myth of Alatriste is now starting to feed off itself, and it remains to be seen how much longer this pattern can be sustained by Perez-Reverte, without entirely disenfranchising his most loyal fans.

Picture it. Your favourite reading spot. A great book and time to enjoy it. Hours have ticked by, you are back in time, totally immersed in romance or adventure. The tension builds, you hold your breath, something pivotal is about to happen...


Suddenly in Regency England they are celebrating Thanksgiving, measuring things in fourths or punching the air in celebration. Whether it is Julius Caesar sucking in oxygen, or collateral damage in the Boer war, such things will spoil the reader’s enjoyment.

Maybe it is a historical fact left unchecked...something being shown before it existed like clan tartans in twelfth century Scotland, or a camera in Regency England. Perhaps a bygone character might say, "get with it," or something else that screams twenty-first century slang.

Or a small simple detail...

A story set in fourteenth century France where one of the characters is said to have worn a beret - berets only came about in 1830's!

A Regency era hero complaining about the "simpering females at White's." However White's was a men's club, so there were no females, simpering or otherwise, to be found therein!

Also look out for anachronisms.

These can pull a reader right out of your story. Are your medieval warriors dining on corn on the cob even though corn wasn't introduced to England back then? Does your heroine read by gaslight in 1800, even though that wasn't introduced to London until 1817? Is the Regency family gathered around Christmas tree? This tradition did not exist until Prince Albert married Queen Victoria...

Even worse, do your Victorian female characters have modern names, such as Crystal, or worse yet names that were for men like Jamie and the like?  Are your women striding about with twenty-first century attitudes morals and freedoms?

Do remember that some things may in fact be correct but they might jar anyway. Traffic lights in Leningrad back in 1942? Well in truth they did exist but it has never felt right.

We invite you to add the Book Bloopers you have come across or dare we say, created?

Resources - get some online help:

http://hearwritenow.com/writing/resources/mistakes/
( this is a series of ebooks focused on individual subjects)

Savvy Authors - How to Open Doors to the Past by Cindy Vallar:

The Adventures of an Intrepid Reader: The Historicial Novel Society comes to Australia!

The Adventures of an Intrepid Reader: The Historicial Novel Society comes to Australia!: Today I am pleased to welcome James Vella-Bardon to my blog to talk about the new Historical Novel Society Sydney! As a big historical ficti...
Posted by HNS (Sydney) at 11:01 AM No comments: