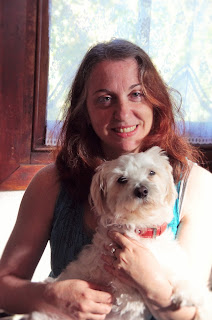 Our guest today is Rachel Nightingale. Rachel has been writing since the age of 8 (early works are safely hidden away). She holds a Masters degree and PhD in Creative Writing. Winning the Mercury Short Story competition (junior section) at the age of 16 fueled her desire to share her stories with the world. Subsequent short stories have been shortlisted in a number of competitions and a play, No Sequel, won the People's Choice Award and First Prize at the Eltham Little Theatre's 10 Minute Play competition. Another, Crime Fiction, was performed at Short and Sweet Manila and Sydney.


Rachel’s second passion after writing is the theatre, and she has been performing in shows and working backstage for a rather long time. She co-wrote and performed in the 2013-2015 version of the hugely popular Murder on the Puffing Billy Express, a 1920s murder mystery set on the iconic Dandenong Ranges train. The inspiration for the Tarya trilogy, which begins with Harlequin's Riddle, began when she read a quote by Broadway actor Alan Cumming about that in-between moment just before you step onstage, and began to wonder might be found in that place between worlds. You can connect with Rachel via Facebook and Twitter or her blog.


What is the inspiration for your current book?


Is there a particular theme you are exploring in this book?

We’re at a point in time where technology has enabled anyone to produce a professional looking ‘product’, whether that be a film, book or digital art, and many people think that’s a substitute for hard work, original ideas and getting good at your craft. We’re seeing the rise of very formula ‘art’, where people copy what others have done to try to capture their success. This is encouraged by the big entertainment corporations who hold the marketing strings. The fact that the final decision about whether a book will be published is made by the marketing department on the basis of whether it will sell, not by a skilled editor who knows good storytelling, is appalling. So in the Tarya Trilogy artists’ work is proscribed – they are not allowed to do anything that is too original or that might actually move or transport the audience. If they do, they are severely penalised.

The Tarya trilogy is fantasy, but it is essentially set in the Italian Renaissance. I have only stepped sideways into a fantasy world in order to bring magical experiences into the story. The books centre on the travelling players, the Commedia dell’Arte (Harlequin, Columbine, Pierrot and others), who travelled around Italy in the 1500s. The setting and costumes are all based on that era, and the arc of the story, in terms of the dominance of the Commedia dell’Arte as an artform, follows historical occurrences.

As a historical reenactor, I have researched, made and worn Italian Renaissance dresses, so that very much feeds into what people are wearing in the books. Being in the SCA provides fabulous research opportunities because there is always someone who has done in-depth research on something you want to know about and is happy to share their knowledge, or point you in the right direction. I have also done mask making and have an extensive background in theatre and improv so the performance side of things comes from direct experience. John Rudlin’s book, Commedia dell’Arte, An Actor’s Handbook, was a key resource. I used other resources on the Renaissance for things like the ‘Memento Mori’ skeleton jewellery that appears in the second book. In terms of setting I experienced one of those inexplicable things that sometimes happen to writers – I describe towns and cities with buildings covered in tiles that form pictures. I’ve never been to Europe, but after I’d written these descriptions I found photographs of European towns where these buildings existed!

Writing fantasy gives me the room to play with things, so I’d have to say I aimed for an authentic feel as the backdrop to the more magical occurrences rather than trying to get things exactly write, although sometimes I do work from an image (eg a piece of artwork from the time) and try to describe it as accurately as possible. I’m currently writing a play based on a historical figure though, and that is completely different – I am absolutely aiming for accuracy. Her life is pretty dramatic, so I definitely don’t need to make things up to create drama.

Luka, who plays Pierrot onstage, has to be my favourite. You don’t see much of him in the first book, but he becomes increasingly important in the second and third books. He’s quiet and gentle, the antithesis of Hollywood’s definition of a hero, but without him Mina’s story would be very different.

Definitely a plotter. When you’re writing over three books you have to keep track of plot points closely, and it was important to me to seed events or ideas in the first book that would come to fruition in the final one, so that meant thinking it all through well in advance. I much prefer reading books that do this, so that’s my aim. I’m hoping my writing speed picks up – real life has always got in the way so writing has been a slow, slow process, but I’m making it a priority now. The second book in the Tarya trilogy, which will come out in the middle of next year, is already complete luckily so I have a bit of time to work on the third one!

I nearly failed my first year of university because I spent swot vac reading The Mists of Avalon, by Marion Zimmer Bradley. The way in which she takes myth and makes it believably real in a historical context is a huge inspiration for me. I also love Ray Bradbury’s wordsmithing ability – I hope to be half as good as him in a few more decades.

Read and write a lot, and if you seriously want to be a writer, take your writing seriously. There is some luck involved, but a lot of it is hard work, professionalism and the willingness to keep developing your craft.

I’m writing a full length play about an intriguing historical figure. It started out as a ten minute play, but she wasn’t happy with having such a short time to tell her story! I’m working out how I can use theatrical techniques to play around with the idea of truth in the story of someone’s life. I’m hoping by interval I can convince the audience of one thing, then show them after interval that this can’t possibly be true! 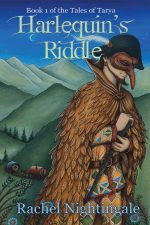 The Gazini Players are proud to present
For your Edification and Enjoyment
Tales of great Joy, and of great Woe

Ten years ago, Mina’s beloved older brother disappeared with a troupe of Travelling Players, and was never heard from again.

On the eve of Mina’s own departure with a troupe, her father tells her she has a special gift for Storytelling, a gift he silenced years before because he was afraid of her ability to call visions into being with her stories.

Mina soon discovers that the Travelling Players draw their powers from a mysterious place called Tarya, where dreams are transformed into reality.  While trying to solve the mystery of her brother’s disappearance, she discovers a dark cost to the Players’ onstage antics. Torn between saving her brother or exposing the truth about the Players, could her gifts as a storyteller offer a way to solve Harlequin’s riddle?

Thanks Rachel. Good luck with your debut!

The HNSA 2017 Melbourne Conference is being held on 8-10 September 2017 at Swinburne University. Rachel Nightingale is a busy girl! She will be appearing in in Session Three on Saturday 9 September at 11.15am-12.15pm.

She is also acting as our narrator in our First Pages Pitch Contest on Saturday 9 September and will be conducting a super session on Recreating Historical Costumes on Sunday 10 September.

What is it like to wear a Tudor outfit or dance in a Renaissance dress? How heavy is an ancient Chinese hanfu and how much fabric goes into its creation? These questions and more will be answered by Rachel Nightingale in this workshop, where you will have a chance to get up close and personal with a range of outfits made by historical re-enactors based on research and portraits. You will have the chance to look at a number of costuming books that deconstruct historical costumes, and perhaps even to try on a historical outfit.

Rachel is also appearing in our Meet the Author satellite event on 18 June at the Mail Exchange Hotel, 688 Bourke St, Melbourne from 2.30-4.30pm discussing Ancient and Medieval Fiction with Lindy Cameron, Barbara Gaskell Denvil, Linda Weste and Paul Hansen. More information and tickets are available from the HNSA website.

The conference is a celebration of the historical fiction genre which will showcase over 60 speakers discussing inspiration, writing craft, research, publishing pathways and personal histories in our weekend programme. Among the many acclaimed historical novelists participating are Kerry Greenwood, Kate Forsyth, Deborah Challinor, Libby Hathorn, Lucy Treloar, Sophie Masson, Sulari Gentill, Robert Gott and Arnold Zable. The HNSA’s speakers’ list is available on the HNSA website.