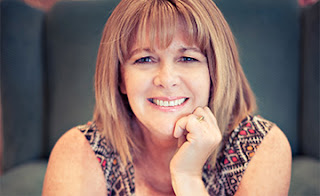 Our guest today is Lisa Chaplin. Lisa is a former nurse, wife and mother of three who has sold more than 1.6 million books worldwide with 20 published romance and historical fiction novels. The Tide Watchers was her first published historical fiction, published across the English-speaking world by HarperCollins. Her next historical fiction is Incomparable Shadows, a real Scarlet Pimpernel novella, and The Memory of Cardamom series, about the young prophetess forced to marry the king who murdered her husband. Her agent is Eleanor Jackson of Dunow, Carlson and Lerner Literary Agency in New York. You can connect with Lisa via her website, Twitter and Facebook.

In the lead up to the 2017 HNSA Conference in Melbourne, we thought readers would like to know a few of Lisa's favourite things. Could you please share with us what is or was your favourite...

Book as a child and as a teenager?

Heidi and Little Women, and the What Katy Did series. Then The Lord of the Rings, and Anne of Green Gables.

All of them! I adore hidden history in any era – it fascinates me. But I do have a sneaking fondness for ancient Near East history. It takes time and patience to find the story between the wide cracks of accepted history, always changing with new findings. Going to Israel and Jordan changed my writing life. I now dream of getting a residency in Jerusalem.

Character in one of your own books?

It has to be Bathsheba from The Memory of Cardamom series. Her story’s been crying out to be told for so long, not as a wide-eyed girl falling madly in love with a king, or the scheming girl “bathing on the roof” as the song said (which, if she had done it, would have seen her stoned to death by Law), but as the 19-year-old girl forced into the bed of a 51-year-old king, and then had to marry her husband’s murderer, see her baby son die, and then endure civil war led by her own grandfather. After 15 years of research, this character began talking to me, demanding her side of the story be heard, waking me almost every night until I got up and wrote for her, I call it scribing.

I honestly loved writing the battle scenes from the point of view of an unwilling child prophetess, seeing the gore and violence from far off, and yet each one left its mark on her. I think my favourite is the Battle of the Valley of Salt, when a triumphant David comes to her home in the Ein-Gedi wilderness to share his victory with her, and sees her covered in welts and blood-bruises from her vision. I cried when the glorious king finally sees what his need for a prophetess does to a 14-year-old girl.

It changes over time, like libraries and cafés, but my current favourite is my brother-in-law’s desk near Frankfurt, Germany. We house sat for them over December-January, and I wrote the last two-thirds of the book in 6 weeks there after having visited Israel and Jordan for research.

Step in the process of writing?

I adore research, discovering the depth and meaning of the story I’m about to write – but I love editing best. Draft 5, 10, 20 – it doesn’t matter to me how many I do, so long as I see a better book emerging. I will kill my darlings cheerfully – cut characters, scenes, and even chapters – if I see the sense in it. I’ll always keep the original draft, and then rip the guts out of a copy and rewrite it, to see if it’s better. For The Tide Watchers, the ‘final’ draft my agent sent out was 143,000 words. Then I was told it needed to be fewer than 110,000 words to sell. So I created another draft, and cut 25,500 words from it, being ruthless with myself and the storyline. That was when it sold to HarperCollins NY – and my new editor wanted another 25,000 words added to it! But not the original ones. So I rewrote yet again. It’s hard work, but I think the best possible version of the book hit the shelves.

Typing all the way. I do longhand for my prep work – notes in research books, the elevator pitch, character arcs and the clock arc. Then I type the rest. I get writer’s cramp too easily!

My kids would roll their eyes at this question. I have so many, but big favourites currently are The Hunger Games (for structure), Magnificent Century (for the life of a concubine). I love quiz shows like the UK Chase, and Letters and Numbers (I am such a nerd!), and the Chinese dating show If You Are The One. It’s fun, and an excellent insight into Chinese culture.

Anything cheesy. I love cheese, and corn thins with hummus, sun-dried tomatoes and rocket. Yum! 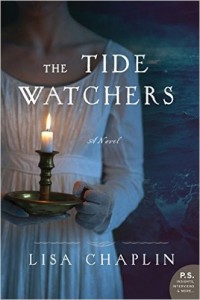 In the winter of 1803, one woman stands between Napoleon and the fall of Great Britain.

The free-spirited daughter of an English baronet, Lisbeth defies convention by eloping to France. When her husband abandons her, she must find a way to survive and be reunited with her young son, who is in the care of her mother-in-law.

A seasoned spy known as Tidewatcher, Duncan apprenticed under Lisbeth’s father and pledged to keep his mentor’s pretty daughter safe—a promise complicated by the wily Napoleon Bonaparte. The British believe he is planning an attack, and Duncan is sent to search for signs of invasion on the French coast—where he draws dangerously close to adventurous and unpredictable Lisbeth.

A sensational new invention may shift the tide of a French victory. A brilliant and eccentric American inventor named Robert Fulton has devised a deadly weapon that can decimate an enemy’s fleet. To protect English ships, Tidewatcher must gain control of Fulton’s invention and cross enemy lines . . . but he cannot do it alone. Left with no other options, he enlists Lisbeth’s help in outwitting the American inventor and uncovering Bonaparte’s secret plans.

Going undercover for the handsome and duty-bound spy, Lisbeth risks her freedom and her life as she navigates double agents and submarine warfare to outwit the greatest military tactician in history. The only question is . . . who can she trust?

The Tide Watchers is available via Harper Collins Australia or Amazon US.

Many thanks Lisa. We are very excited that  you are going to at the conference as a speaker and also as a tutor in the following super session:

From Elevator Pitch to Finish: How to Successfully Pitch Your Book in 30 Seconds

‘What’s your book about?’ In these fast-paced days, you literally have 30 seconds to engage the potential reader, editor or agent. And if you can’t be coherent about your story, that says a lot about the book itself.  From Elevator Pitch to Finish is a fully interactive workshop designed to help each writer produce a professional elevator pitch (or story arc), filled with “signposts” that tell agents how to sell your book to editors, or shows editors your target markets – and gives the editor or agent plenty of time to ask the questions that prove their interest in your book – which is what we all want! With over half a dozen handouts for this 60 minute workshop alone, all you need bring is your story idea and your imagination.

More details about our workshop programme are available at our website.


A Rose by Any Other Name: What’s the Difference between Historical Romance and an Historical Love Story?


Booksellers and publishers are called upon to categorise books for ease of selection. But aren’t historical romance and historical love stories the same? Do readers care about the pigeon holing of books into sub-genres? And if it’s necessary, what is required to establish the difference when writing a book? Elisabeth Storrs discusses these concepts with Isolde Martyn, Alison Stuart, Lisa Chaplin and Anna Campbell.

Historical romance writers might also be interested in the super session workshop below. A ticket to the workshop entitles the attendee an entry into a giveaway for a $100 Dymocks gift card. More details about our workshop programme is available at our website. Purchase of a day or weekend conference ticket is a pre-condition to booking.


‘Historical romance’ covers a wide range of styles, with varying degrees of history and romance. Internationally published, award-winning authors Anne Gracie and Isolde Martyn will share their tips about writing historical romance, the craft of story-telling, the importance of research, and creating historical characters and atmosphere, as well as some ‘how-not-to’ advice to help authors reach an international market.
The 2017 HNSA Melbourne conference will be held on 8-10 September in association with Swinburne University. This celebration of the historical fiction genre will showcase over 60 speakers discussing inspiration, writing craft, research, publishing pathways and personal histories in our weekend programme. Among the many acclaimed historical novelists participating are Kerry Greenwood, Kate Forsyth, Deborah Challinor, Libby Hathorn, Lucy Treloar, Sophie Masson, Sulari Gentill, Robert Gott and Arnold Zable. The HNSA’s speakers’ list is available on the HNSA website.

Let’s make a noise about historical fiction!
Posted by Historical Novel Society Australasia at 9:49 AM