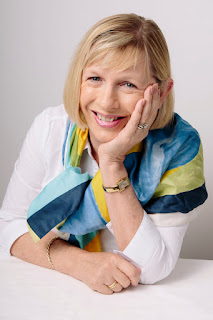 Our guest today is Elisabeth Storrs who graduated from University of Sydney in Arts Law, having studied Classics. Her curiosity piqued by an Etruscan sarcophagus depicting a couple embracing for eternity, she discovered the little known story of the struggle between Etruscan Veii and Republican Rome and the inspiration to write the Tales of Ancient Rome Saga which has been endorsed by Ursula Le Guin, Kate Quinn and Ben Kane. Over the years Elisabeth has worked as a solicitor, corporate lawyer and corporate governance consultant. She is the former Deputy Chair of the NSW Writers’ Centre and one of the founders of the Historical Novel Society Australasia.

The Wedding Shroud, The Golden Dice and Call to Juno are available here.

In the lead up to the 2017 HNSA Conference in Melbourne, we thought readers would like to know a few of Elisabeth’s favourite things. Could you please share with us what is or was your favourite –

Book as a child and as a teenager?

As a young child I loved Enid Blyton’s Famous Five, and Hugh Lofting’s whimsical Dr Dolittle series with its charming illustrations. As a teenager, I was transported by Gone with the Wind. I read it so often the paperback fell apart. I loved the fact Scarlett was so flawed. Other favourites were H Rider Haggard’s She. I also devoured Jean Plaidy’s books including those she wrote as Victoria Holt. Daphne Du Maurier’s Jamaica Inn and Charlotte Bronte’s Jane Eyre remain as perennial favourites of mine. 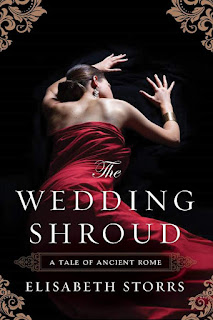 My favourite author and inspiration is Mary Renault. From the moment I read The Persian Boy I fell in love with the poetry in her prose. She engendered a desire in me to write about the ancient world. Other favourites are Patrick Susskind, Jim Crace and Margaret Atwood. I am a bit of a nerd so I have to mention the Roman poet, Vergil, whose rendering of the tragic love story of Dido and Aeneas in The Aeneid contains some the of the most poetic language I’ve ever read.

The early Roman Republic and Etruria in C5th and C4th BC. When ancient Italy is mentioned most think of Rome as the dominant culture. Yet the Etruscans had built a sophisticated and extensive civilisation well before the Romans were fighting turf wars with other Latin tribes. At one stage Etruscan kings ruled Rome. At its height, Etruria and its settlements extended throughout the modern regions of Umbria, Tuscany and Lazio and also dominated trade routes stretching from the Black Sea to northern Africa.

The Etruscans have held my attention for over fifteen years of research. They afforded independence, education and sexual freedom to their women at a time when other parallel societies repressed females. This liberal, mystical and cosmopolitan society inspired me to write the Tales of Ancient Rome Saga which chronicles the events of a ten year conflict between Republican Rome and Veii, a city described as the ‘jewel in the crown’ of the Etruscan world. It is the tale of two lovers who are blamed for starting a war, and the journey of three women to survive a siege.

Character in one of your own books?

Such a difficult question. I love my three female protagonists: Semni, an Etruscan artisan, and Pinna, the ‘night moth’ prostitute who plies her trade in the graveyards of Rome; but it is Caecilia with whom I have lived the longest. She lies at the heart of the saga. She is a young Roman girl married by politicians to an enemy Etruscan nobleman to seal a truce. Determined to remain true to ‘Roman virtues’ she grapples with conflicting moralities as she is slowly seduced by both her husband and the freedoms his world affords her. In The Wedding Shroud, she is an intolerant, stubborn 18 year old thrust into an alien world. She often makes unlikeable choices due to her naivety and being manipulated by others. Some readers find her petulant and frustrating but I wanted her to be imperfect as well as courageous. In The Golden Dice and Call to Juno, she matures into a complex, confident woman who chooses her husband over her birthplace. Caecilia lives under constant threat. She is considered a traitoress by her people yet is not fully trusted by her adopted city. Each challenge I forced Caecilia to face had to be overcome within the limited framework of power available to women of those times. I loved finding reserves of strength within her throughout her journey from being Rome’s pawn to Veii’s queen. 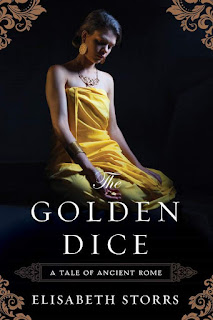 The very first scene of The Wedding Shroud when Caecilia stands quaking under her orange wedding veil as she is led to meet her ‘enemy’ bridegroom. I rewrote those first paragraphs dozens of times before I was happy with them. I wanted my readers to feel the sensation of being trapped; how her senses were heightened by fear.

I write at my kitchen table which drives my family crazy because I’m so messy. I like the cosiness of the room and the fact I can see my garden. However, my favourite day of the week is Wednesday when I sit at my local café and write after a huge mug of coffee and fruit toast.

Step in the process of writing?

I find the blank page very intimidating. Writing the first draft is demanding. That’s why I absolutely love editing. I like being able to refine my work and mould it. ‘Murdering my darlings’ is always hard but it’s essential to be as brutal with the ‘pen knife’ as I can.

I used to write first drafts in longhand but I’ve taught myself to now type directly into Scrivener to save time. However, if I’m really struggling with a concept, I will pick up a pen as I find the physical act of writing on paper helps free up ideas. 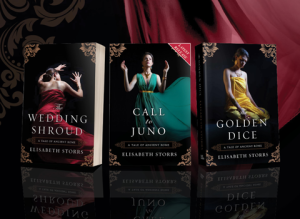 'The Bad Seed' is my all time favourite movie – it’s a B-Grade Black & White film about a perfect little girl suspected to have homicidal instincts that she may or may not have inherited. Simultaneously chilling and corny! 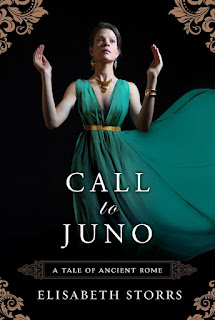 "An elegant, impeccably researched exploration of early Rome and their lesser known enemies, the Etruscans. The torments of war, love, family, and faith are explored by narrators on both sides of the conflict as their cities rush toward a shattering, heart-wrenching show-down. Elisabeth Storrs weaves a wonderful tale!"  Kate Quinn, author of The Empress of Rome Saga.


Four unforgettable characters are tested during a war between Rome and Etruscan Veii.

Caecilia has long been torn between her birthplace of Rome and her adopted city of Veii. Yet faced with mounting danger to her husband, children, and Etruscan freedoms, will her call to destroy Rome succeed?

Pinna has clawed her way from prostitute to the concubine of the Roman general Camillus. Deeply in love, can she exert her own power to survive the threat of exposure by those who know her sordid past?

Semni, a servant, seeks forgiveness for a past betrayal. Will she redeem herself so she can marry the man she loves?

Marcus, a Roman tribune, is tormented by unrequited love for another soldier. Can he find strength to choose between his cousin Caecilia and his fidelity to Rome?

Who will overcome the treachery of mortals and gods?

The HNSA 2017 Melbourne Conference is being held on 8-10 September 2017 at Swinburne University. Elisabeth Storrs will be appearing in Session Five on Saturday 9 September at 2.15-3.15 pm in the following panel:


Venturing Forth: Exploring Stories Beyond National Boundaries and Australasian History


Elisabeth is also conducting a super session with Elizabeth  Lheude in Session Four on Sunday 10 September at 12.30-1.30 pm on 'Building an Author Platform: Social Media Basics for Historical Novelists.'


Historical Romance fans might also like to consider attending the workshop run by Anne Gracie and Isolde Martyn on how to attract an international audience. A ticket to the workshop entitles the attendee an entry into a giveaway for a $100 Dymocks gift card. Purchase of a day or weekend conference ticket is a pre-condition to booking.

More details about our workshop programme are available at our website.

‘Historical romance’ covers a wide range of styles, with varying degrees of history and romance. Internationally published, award-winning authors Anne Gracie and Isolde Martyn will share their tips about writing historical romance, the craft of story-telling, the importance of research, and creating historical characters and atmosphere, as well as some ‘how-not-to’ advice to help authors reach an international market.
Finally, Elisabeth will be appearing at Sutherland Library on 29 May 2017 at 6.30 - 8.30 pm in our Meet the Author satellite event with Isolde Martyn, Debbie Robson, Julianne Miles-Brown and Diane Murray in 'Follow that Horse: All you wanted to know about researching, writing and publishing historical fiction.' The event is free but bookings are essential.

In addition to the two stream weekend programme, there will be ten craft based super sessions and two research masterclasses. You won’t want to miss our interactive sessions on armour and historical costumes either! Manuscript assessments will be conducted by industry experts Alison Arnold and Irina Dunn. Our free extended academic programme is open for general admission but bookings are essential.

Posted by Historical Novel Society Australasia at 10:30 AM