Today we are joined by historical novelist Isolde Martyn. Isolde enjoys setting her novels in turbulent times and most of her characters are real people. Her first novel won top awards in the USA and Australia. Her earlier career was in academia and publishing, and she was a senior editor with a major publisher before taking up writing full-time. She is also the vice-chair and co-founder of the Plantagenet History Society of Australia and an active member of the Historical Novel Society. Her previous novel The Golden Widows is about two young widows on opposing sides during the Wars of the Roses and her latest book Troubadour (published April 2017) is an adventure set in England and France in 1209. 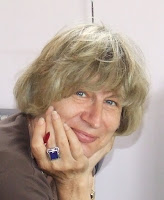 What was the inspiration for your latest novel Troubadour?

Some years ago I visited the restored medieval city of Carcassonne in southern France and heard the stories about the 1209 crusade that Pope Innocent III sent against the Cathars -- Christian heretics.   That sounded like a superb backdrop for a novel especially as there’s resonance with today -- innocent people being slaughtered or else blown up by suicide bombers in the name of religion.
Back in 1209, the crusaders were promised that all their past and future sins would be forgiven if they destroyed both the heretics and those who sheltered them. So, in the name of the orthodox faith, the northern knights attacked cities and villages and flung people on bonfires.

As for the plot of Troubadour, I wondered how you would cope if you were a tolerant ruler and you could see this savage army mustering and know they might attack your city.  How would my main character try to save his people? And what if his strategy was thrown off track because the woman he must marry to secure a military alliance turns out to be an imposter? 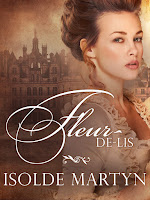 Intolerance, both religious (as mentioned above) and discriminatory. If Derwent, one of my characters, was alive today, he would describe himself as ‘a short-statured person’. Back in the thirteenth century, he would have been feared as a creature of the devil and/or regarded as a spectacle.
A third theme is gender equality. Adela, my resourceful, literate 1209 heroine longs for respect and useful employment but it’s an age when most of the work was done by men. Without board and shelter supplied by a male protector, it was a tough world.


Which period of history particularly interests you? Why?

I love the Late Middle Ages, especially the Wars of the Roses, which was my special area of study for my Honours degree. It’s fascinating to flesh out the main players (fascinating people like Richard III’s cousin, Buckingham, and Mistress Shore) and work out their motives from their actions. Because so few documents have survived compared to the sixteenth century, there is plenty of room for conjecture.

The historian in me is also fascinated by the French Revolution. Individuals making things happen! When did the revolution take the wrong turn and why? However, setting my novel Fleur-de-Lis in Paris 1793 nearly killed my writing career. Apparently, writing about that era was a no-no (all those guillotines!) especially in the USA. It was the time when Bush and Chirac were at loggerheads and fries were renamed ‘freedom fries’. However, Fleur-de-Lis was totally guillotine-free and I still am very proud of having written it.


What resources do you use to research your novels?

The National Archives UK are marvellous because so many original documents are now available online.

As a historian, using what facts are available is crucial to me. However I’m very conscious of the provenance of the sources and the need to evaluate their accuracy. Was the chronicler objective? Up until the late sixteenth century, many so-called historians saw history as a morality tale and sometimes the message was more important than the truth.

The one most fun to create was a laundress, one of the minor characters: ‘Maud’s my name an’ I’m Lady Alys’s lavendière, sounds better in French, don’t it?’  She’s a gutsy, funny, promiscuous survivor.

A pantser. Writing’s an adventure especially when the characters wickedly take over and drag something in from left field.  Getting the historical chronology in place like a line of milestones and where the real people in the story were at the time is vital to me and can be time-consuming, but, phew, once that’s done, it’s a straight road.

I’m thinking about whose books I read again and again: Dorothy Dunnett’s Lymond series for her fabulous research, wonderful imagery, humour, dialogue and the brilliant characters of Philippa and Lymond; Georgette Heyer for the emotional tension she created without a button being unhooked or a stitch giving way; and Daphne du Maurier’s novel Frenchman’s Creek is still one of the most classic love stories I have ever read.

Read your manuscript out aloud to yourself. It’s amazing the errors you’ll pick up. It will help you make your style more fluid and you’ll get to discern the flat bits that go on too long.

It’s a novel set in the late sixteenth century and most of the characters are real people but, forgive me, I don’t want to say any more about it at this point.

Thanks for sharing your story with us, Isolde. Isolde's books are available through Harlequin Books and Momentum Publishing. 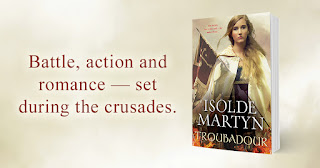 Forced to flee the English court after the lecherous King John attacks her, Adela, the queen’s hairbraider, finds employment in the entourage of Lady Alys. Alys is on her way to marry the Lord of Mirascon, a fiefdom in southern France. However, the south is under threat from Pope Innocent III’s military crusade against the heretics.

After trying in vain to rally his fellow lords against invasion, Richart, Vicomte de Mirascon, makes an alliance with King John. A political marriage to the Lady Alys – the king’s discarded mistress – will allow Richart to safeguard his people from a merciless land grab and cruel slaughter.
When the bridal party is ambushed, Adela is mistaken for her dead mistress by the people of Mirascon. Adela knows she must tell Richart that she is not his betrothed, but as she is dragged deeper into the deception, she is also powerfully drawn to the beleaguered man trying to protect his people and his culture. Adela is recognised by the dwarf Derwent, Richart’s English jester, who seems willing to keep her secret for the time being. Yet as suspicion builds up against her, paying with her life seems inevitable.

As the pope's savage army marches south, can Richart and Adela overcome a web of deceit and treachery and evade the bonfires of the crusaders, or will their land of troubadours and tolerance be destroyed forever?

The HNSA Conference is being held in Melbourne on 8-10 September in association with Swinburne University.

A Rose by Any Other Name: what’s the difference between historical romance and an historical love story?


Booksellers and publishers are called upon to categorise books for ease of selection. But aren’t historical romance and historical love stories the same? Do readers care about the pigeon holing of books into sub-genres? And if it’s necessary, what is required to establish the difference when writing a book? Elisabeth Storrs discusses these concepts with Isolde Martyn, Alison Stuart, Lisa Chaplin and Anna Campbell.

As a treat, Isolde is teaming up with Anne Gracie to conduct a super session on how to write historical romance to attract an international market. A ticket to the workshop entitles the attendee an entry into a giveaway for a $100 Dymocks gift card. More details about our workshop programme are available at our website. Purchase of a day or weekend conference ticket is a pre-condition to booking.

‘Historical romance’ covers a wide range of styles, with varying degrees of history and romance. Internationally published, award-winning authors Anne Gracie and Isolde Martyn will share their tips about writing historical romance, the craft of story-telling, the importance of research, and creating historical characters and atmosphere, as well as some ‘how-not-to’ advice to help authors reach an international market.You can book your place here.

Isolde is also appearing at our next Meet the Author satellite event at Sutherland Library on 29 May 6.30-8.30 pm with Elisabeth Storrs, Debbie Robson and Julianne Miles-Brown where they will be discussing: Follow that horse! All you ever wanted to know about researching, writing and publishing historical fiction. The event is free but booking is essential. You can book  here.

Early bird registration is open for the HNSA 2017 Conference. You will receive 15% off the full price for our weekend programme.  The same discount also applies for tickets to our opening reception.  HURRY! The ticket allocation is nearly exhausted!